Recognizing a healthy longleaf pine forest is easy enough, when you’re walking through it. Stately, mature trees tower over a thick carpet of ferns and switchgrass. Everywhere you look, clusters of long, bright-green needles hang like droopy starbursts.

Many of the remaining large tracts of longleaf pine can be found on public lands; most are well-known to conservationists working to restore these once-dominant forests of the Southeast. Identifying hidden fragments of these critical ecosystems gets a bit trickier on private land, especially when the trees are young, interspersed with other pines, or crowded by intruding hardwoods.

Until recently, one of the few ways to discover these ecological jewels involved time-consuming and costly “timber cruises” conducted by professional foresters. Finding potential conservation sites required time, money and coordination with many private landowners.

But now, longleaf conservation efforts are getting some high-tech help. Scientists based in the Rocky Mountains are using state-of-the-art computing techniques and high-resolution aerial imagery to help their colleagues in the Southeast identify some of the best remaining opportunities to restore the mighty longleaf pine.

“The foresters are joking that they can hang up their cruising vests and just not go out anymore,” Anderson said with a laugh. “But that’s not true at all. We still have to go out and ground-truth this stuff, and we need good field data to develop accurate models.

“But if we can provide relatively accurate estimates of forest characteristics – over large areas, at high resolution, and in ways that are accessible to managers and analysts – then that really is a game-changer when it comes to conservation prioritization. This becomes a really powerful tool for this cross-ownership, cross-organizational planning. I mean, we don’t need to go out and cruise forest tracts blindly – we know what’s out there and where to target our efforts.”

The longleaf pine ecosystem once encompassed more than 90 million acres of North America, stretching from Virginia to Texas. Unique to the southeastern United States, it contains a stunning diversity of plants and animals, including rare and endangered wildlife such as the indigo snake, red-cockaded woodpecker and gopher tortoise. Only 5 percent of the original acreage remains; threatened and endangered species that depend on longleaf habitat are struggling to survive.

For groups such as the Longleaf Alliance and the National Fish and Wildlife Foundation (NFWF), harnessing new analytical capabilities will become even more important as conservation efforts expand from large tracts of publicly owned land to pockets of longleaf on private land.

“A lot of the low-hanging fruit has already been well identified, and much of it is already in the conservation scope of influence,” Anderson said. “The next step is to try to identify some of the stuff that’s a bit more difficult to move into restoration.”

The new tools developed by the U.S. Forest Service team won’t give scientists and conservation organizations easy answers to these questions, he said. But it will give them a much-needed head start in developing new conservation partnerships with willing landowners. For funders of longleaf restoration work, it will help identify high-priority places to invest limited funds, including grants through the Longleaf Stewardship Fund managed by NFWF.

To develop these new tools, Anderson’s team focused on test areas in Florida, Alabama and Georgia which already had fly-over images from the National Agriculture Imagery Program. They zeroed in on extremely detailed, “leaf-on” spectral images of forested areas that already had been studied by foresters on the ground. These study areas served as benchmarks that researchers used to “train” their software systems to predict which pixels represented different cover classes – asphalt, shrubs, grasses, longleaf pine and others – and then linked the imagery to plot data provided by the USFS Forest Inventory and Analysis Program through novel statistical models.

“Different species of pine can have very similar spectral signatures, and it can be very difficult to train a computer to distinguish between them,” Anderson said. “But we’ve developed some new techniques to integrate texture and other factors into that analysis. So it’s not just looking at each individual pixel, but also the values of pixels surrounding them.”

Such predictive power arises from pixel-to-pixel analysis of canopy reflective values, tree density, tree shadows, understory and a host of other factors. To do all this without the use of supercomputers – Anderson’s team uses stock laptops and desktops – the researchers use methods that leverage the latest developments in parallel processing and function modeling and a coding library and suite of software developed by RMRS biological scientist and team member John Hogland. Their methods, which involved writing more than 100,000 lines of code and juggling 15 terabyte datasets, can even offer confidence intervals for model predictions, which allow evaluation of their uncertainty and accuracy. This new set of tools can predict, for example, with 80 percent confidence that a given section of forest contains longleaf pine trees with a diameter greater than 20 inches.

“This is something we developed in Colorado and Montana for different types of forests, but it’s just a great application for longleaf pine,” Hogland said.

In 2015, the Longleaf Alliance was awarded a NFWF grant of about $100,000 to support the U.S. Forest Service team’s development of these cost-effective techniques for longleaf mapping. The project was one of 23 funded by NFWF last year across longleaf’s historic range, totaling about $4.7 million and leveraging $6.4 million more in grantee matching funds. The projects funded just last year will restore more than 11,600 acres and enhance more than 163,000 additional acres of longleaf pine habitat.

The grants are administered by NFWF’s Longleaf Stewardship Fund, a landmark public-private partnership that includes the U.S. Department of Agriculture’s Forest Service and Natural Resources Conservation Service, the U.S. Department of Defense, the U.S. Fish and Wildlife Service, and private funding from Southern Company, International Paper’s Forestland Stewards Initiative and Altria Group. The fund, now in its fifth year, combines the financial and technical resources of the partnership to accelerate restoration of the longleaf pine ecosystem and implementation of the Range-Wide Conservation Plan for Longleaf Pine as part of America’s Longleaf Restoration Initiative. 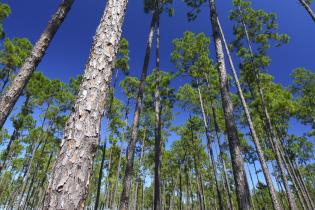 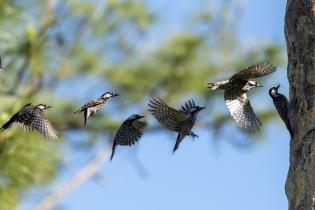