The 1,200-acre Pamunkey Indian Reservation sits on the shores of the Pamunkey River, a tributary of the York River in King William County, Virginia. Home to the federally recognized Pamunkey Indian Tribe, the reservation is located on a portion of the tribe’s ancestral land but is facing modern environmental challenges.

“Anyone who lives on the reservation has known that erosion is an issue, everyone there is concerned about the shoreline, which has been disappearing for some time,” said Kathryn MacCormick, a tribal member and biologist. The tribe endeavored to tackle the substantial shoreline erosion with a plan to protect their land, residents, structures, and buried archaeological sites. 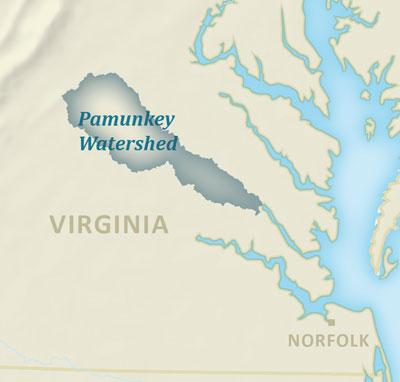 The Pamunkey Indian Tribe received a 2017 Small Watersheds Grant award of $199,544 from NFWF to help address the impacts of coastal hazards, including soil erosion, storms and recreational boat wake. The funding was used to create a management plan for 13 miles of shoreline and construct a living shoreline that will create and reestablish more than 6,000 square feet of marsh habitat. These restoration efforts help reduce sedimentation to the Pamunkey River, which ultimately will reduce sediment loading to the Chesapeake Bay.

Shoreline restoration provides a natural buffer to decrease erosion from high water and wave action that threatens the reservation, where the terrain is only a maximum of 9 feet above sea level. “Marsh is insurance against flooding, a living buffer” said MacCormick, noting the importance of maintaining and increasing this inter-tidal zone.

Scott Hardaway, marine scientist supervisor at the Virginia Institute of Marine Science, assisted with efforts to construct a rock breakwater to slow down the wave energy hitting the shore by creating a planting terrace. Volunteers helped plant the terrace with freshwater sedges and grasses to help restore and enhance the marsh.

“We’re preserving or establishing the marsh fringe which is also good for the fishes and the water quality,” said Hardaway said. “Some of the rock will allow shelter for the smaller fish and algae will attach to the hard substrate, functioning like a little reef.”

The tribe hopes to continue to implement their management plan to remedy erosion and protect vital habitat along the remaining shoreline surrounding the reservation. These sustained efforts contribute to the Pamunkey Indian Tribe’s goal of “inspiring and promoting natural restoration along the Virginia Rivers and leading preservation efforts for the next seven generations.”

Maryland to benefit from over $12 million in conservation grants