It’s hard to believe that until just a few years ago, biologists had yet to document or study a 150-mile migration of thousands of large mammals through Wyoming.

Mule deer, after all, aren’t exactly inconspicuous. A big buck can weigh 300 pounds or more and sport a jaw-dropping set of antlers.

Until University of Wyoming biologists tracked these animals with GPS collars, common wisdom held that the mule deer of southern Wyoming were part of a resident herd. However, biologists discovered that various herds of mule deer – about 5,000 animals total – actually migrate up to 150 miles, twice a year, between wintering grounds in the Red Desert and summer grazing areas in the Upper Hoback River watershed.

The journey takes these animals through public and private lands, over major highways, past neighborhoods, through rivers – and over, under and around a gauntlet of fences.

The discovery quickly led to the stark realization that this migration, essential to the survival of the herds, was inching closer to disaster. Formerly open lands were being developed and new barriers built. At key pinch points, thousands of mule deer were being funneled between residential developments and lakes.

The situation had grown particularly dire at the Fremont Lake bottleneck in Sublette County, where nearly all of the deer passed through an area just a few hundred yards wide before confronting more than a mile of 8-foot-tall elk fencing. Mule deer could be seen walking back and forth along the fence, looking for a way through. To make matters worse, a key 364-acre parcel in this bottleneck was put on the market, destined to be developed.

Under the leadership of The Conservation Fund, biologists, state officials, foundations and conservation organizations sprang into action, quickly raising funds to buy the bottleneck property and eventually transfer it to the state.

Through a grant of $100,000 awarded to The Conservation Fund, NFWF’s Great Migrations and Crucial Corridors program supported efforts to tear down fencing and improve other features, clearing the path for mule deer migration.

“This ranks as the longest ungulate migration ever recorded in the lower 48 states, and it’s been happening right under our noses all these years,” said Mark Elsbree of The Conservation Fund. “Protecting migration routes like this, especially at critical bottlenecks, will take a concerted conservation effort that ties together scientific discovery, funding from public and private organizations, and the help of willing landowners.” 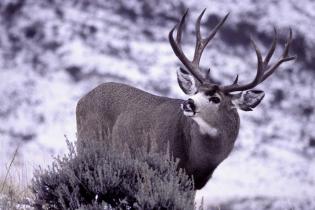