WASHINGTON, D.C. (December 7, 2022) – With $3.1 million in new grants announced today, Walmart’s Acres for America conservation program has surpassed a key milestone by supporting the permanent protection of more than 2 million acres of vital wildlife habitat across the United States since its founding in 2005.

The six land conservation projects announced today by the National Fish and Wildlife Foundation (NFWF) will permanently protect more than 200,000 acres of vital wildlife habitat in the U.S. The Acres for America grants will leverage $133.4 million in matching contributions from grantees and other partners to generate a total conservation impact of $136.5 million.

"With this set of grants, Walmart’s Acres for America program has reached the milestone of supporting the conservation of more than 2 million acres, helping protect and restore nature in many of the same communities where Walmart operates across the country," said Hunter Hart, Senior Vice President, Realty, Walmart U.S. "NFWF and conservation partners in local communities have helped the program play an important role in preserving vital habitats over the past 18 years."

"This year marks a monumental achievement in the history of NFWF’s collaboration with Walmart through the Acres for America program," said Jeff Trandahl, executive director and CEO of NFWF. "Together, we have supported the conservation of more than 2 million acres of vital habitat across the country, resulting in increased connectivity for wildlife and better access to the outdoors for millions of people, now and for future generations."

The latest slate of grant awards, the 18th year of funding through the Acres for America program, support projects that were selected based on their ability to permanently protect wildlife habitat of national significance, and to benefit local communities and local economies. These projects exemplify strong conservation partnerships between private funders and state agencies. Highlights from this year’s grant slate include:

"The Cumberland Forest land acquisition project will create the largest state wildlife management area in Kentucky, providing 54,000 acres for permanent public access for present and future generations to enjoy and conserving in perpetuity important habitats for wildlife," said Rich Storm, Commissioner of the Kentucky Department of Fish and Wildlife Resources. "We are thrilled to learn of the ‘Acres for America’ grant to help make this exciting project a reality. We are thankful to the National Fish and Wildlife Foundation and all of our partners, including the Rocky Mountain Elk Foundation, The Nature Conservancy, the Kentucky General Assembly and the federal Wildlife and Sport Fish Restoration Program, all of which are providing vital funding and in-kind assistance."

"This effort will nearly triple the size of Amicalola Falls State Park, one of Georgia’s most popular state parks," said Steve Friedman, Chief of Real Estate at the Georgia Department of Natural Resources. "If not for our partnership with The Conservation Fund, the National Fish and Wildlife Foundation and others, this land would likely have been lost."

"Northern Georgia is one of the most biodiverse parts of the country, yet it faces immense risk of development, deforestation and habitat loss every day," said Larry Selzer, president and CEO at The Conservation Fund. "This strategic state park expansion is of particular importance. Not only does it protect additional recreational opportunities for the community and habitat for wildlife, but it secures critical connectivity to other vital public lands in the area like Oconee-Chattahoochee National Forest and the Appalachian Trail. We are grateful for this tremendous support from the National Fish and Wildlife Foundation through Walmart’s Acres for America Program."

"Save the Redwoods League is grateful for the support from Walmart’s Acres for America program through the National Fish and Wildlife Foundation for the purchase of a conservation easement on Weger Ranch in the redwood forests of California," said Sam Hodder, president and CEO of Save the Redwoods League. "This is a critical piece of our larger vision to protect an 11,500-acre redwood landscape."

Acres for America began in 2005 when Walmart made an initial 10-year, $35 million commitment to purchase and preserve an acre of wildlife habitat in the United States for every acre of land developed by the company. Walmart surpassed that commitment and renewed the program for another 10 years in 2015. The program has now had the combined effect of helping to protect more than 2 million acres across 42 states, the District of Columbia, and Puerto Rico. Over the past 18 years, Acres for America has funded more than 112 projects and has leveraged Walmart’s $60 million investment with matching contributions that have generated a total conservation impact of more than $1 billion.

Learn more about Walmart’s goal, together with the Walmart Foundation, to protect, more sustainably manage, or restore nature here.

About the National Fish and Wildlife Foundation
Chartered by Congress in 1984, the National Fish and Wildlife Foundation (NFWF) protects and restores the nation’s fish, wildlife, plants and habitats. Working with federal, corporate and individual partners, NFWF has funded more than 6,000 organizations and generated a conservation impact of $7.4 billion. Learn more at www.nfwf.org.

Acres for America in Virginia 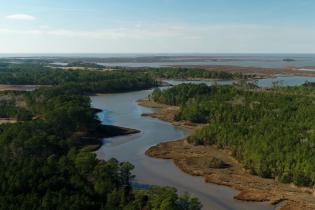