The Walker Basin Restoration Program (Program) continues to work with the Walker River Irrigation District (WRID or the District) to develop a three-year water leasing demonstration program. The lease program will build on the successful 2011 floodwater forbearance agreement.  As stated by the Program legislation WRID will administer the leasing program with funding provided through an agreement between the District and the National Fish and Wildlife Foundation (NFWF).

NFWF and the District previously negotiated a $25 million lease agreement that included a lease price both parties agreed to in April 2010. NFWF signed the lease agreement in January 2011, but WRID did not countersign because of a variety of constituent concerns. WRID provided a revised proposal to NFWF in April 2012, nearly two years after the previous price was negotiated. The revised proposal is to lease storage water only, and no longer includes decree water.

A public meeting of WRID’s Advisory Committee took place on June 13, 2012 to discuss NFWFs comments on WRIDs revised proposal. The primary focus of the meeting was how to move forward on issues related to the price in light of NFWF’s concerns that the price can no longer be justified by the current market.

Director of the Program, David Yardas, further explained, “Federal guidelines require documented cost or price justification based on current market values. While the Program had hoped to avoid the need to reconsider the April 2010 lease program price we simply cannot rely on values and assumptions that are based off information which is several years old and not supported by the current market”.

Since the previous negotiations in 2010, the market has changed.  The old price was justified primarily on the basis of payments made for 100% land fallowing on the Walker River Indian Reservation in 2009 and 2010. The old price was also based on both decree and storage water. In contrast, the current lease program will only include storage water.  Additionally, property values based on local ranch sales have continued to drop, including the price of storage water. Water lease prices in neighboring water markets have also declined significantly.  Furthermore, annual leases and sales of storage water between irrigation users have routinely been a fraction of the April 2010 negotiated lease price.  Even the highest local farm lease rates for land with water do not support a lease price for stored water anywhere close to the previously negotiated price.

Understanding how difficult further negotiations might be, NFWF has proposed moving forward with a joint independent appraisal to determine the current lease price and provide the necessary price justification. Yardas went on to explain “[i]f the concerns related to price expressed by Advisory Committee members hold true, then an independent appraisal should bear them out. NFWF is also open to other ways to document cost or price justification such as through an appropriately structured reverse auction.  Previous discussions with the District had not elicited much interest in this process, but this option may be of renewed interest under the current circumstance. A reverse-auction may provide the opportunity to move forward without commissioning an appraisal and may allow the market to be determined in a more time efficient manner.”

Whatever the resolution, NFWF continues to believe that water leasing is a critical component in efforts to restore Walker Lake to ecological health, and that with diligent and good faith effort the demonstration water leasing program can still be underway in time for the 2013 irrigation season. 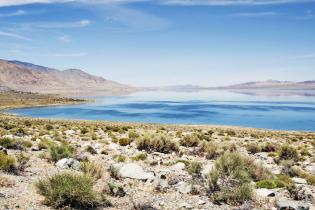