In its inaugural year, the Papahānaumokuākea Research and Conservation Fund is soliciting a collaborative proposal for up to $900,000 to conduct a research expedition planned for the summer of 2018.

Papahānaumokuākea is a remote archipelago of islands, reefs and atolls in the northwestern sector of the Hawaiian Island chain. Many of the thousands of species of fish and wildlife that inhabit this area are found nowhere else on earth, including threatened and endangered species such as the Hawaiian monk seal, green sea turtle and Laysan albatross.

“The National Fish and Wildlife Foundation has been funding the conservation of Hawaii’s forest bird, coral reef and seabird species since the early 1990s. This new partnership expands investments to include additional species and landscapes in the Papahānaumokuākea Marine National Monument,” said Jeff Trandahl, executive director and CEO of NFWF. “This research will play an important role in helping to better understand the impacts of the conservation investments we are making today.”

Much of the northwestern Hawaiian archipelago remains unexplored, particularly in depths of 100 feet or more. The partnership will focus on French Frigate Shoals (Kānemiloha‘i), an ecologically important atoll where over 90 percent of Hawaiian green sea turtles nest and a large portion of the northwest Hawaiian Island monk seal population reproduces.

“The Northwestern Hawaiian Islands are one of the greatest natural laboratories in the world,” said Randy Kosaki, NOAA’s PMNM deputy superintendent for research. “This research program will improve the management both here at home and for marine ecosystems globally.”

Partners are seeking to support research that will address key management questions about the importance and interconnectivity of different habitats across the Hawaiian archipelago to help understand complex food webs, mitigate threats like plastics, and allow for proactive management of environmental stressors like coral bleaching and sea level rise.

“Papahānaumokuākea is a place of globally unique biodiversity and great cultural significance in Hawaii and the U.S.,” said Marc and Lynne Benioff. “It is a privilege to join NOAA and NFWF to advance the study of Papahānaumokuākea so that we may better protect this special place and apply what we learn to improve ocean health in communities around the world.”

“Healthy oceans drive our nation’s economy, and this expedition marks an investment in our future prosperity.  Increasing maritime traffic, marine debris, and fishing all take their toll on the sea, and we need the best possible science and research to help us manage these impacts,” said U.S. Senator Brian Schatz, Hawaii. “I am impressed by the broad support this project has drawn because it shows the diversity of support for responsible, science-based management of our oceans.”

Pre-proposals are due October 26 and the full Request for Proposals can be found here.

The Papahānaumokuākea Research and Conservation Fund is part of NFWF’s broader Hawaii Conservation Program. For more information on these initiatives, please visit www.nfwf.org/hawaiiconservation.

About the National Oceanic and Atmospheric Administration
NOAA’s mission is to understand and predict changes in the Earth's environment, from the depths of the ocean to the surface of the sun, and to conserve and manage our coastal and marine resources. Join us on Twitter, Facebook, Instagram and our other social media channels.

The Office of National Marine Sanctuaries serves as the trustee for a network of underwater parks encompassing more than 600,000 square miles of marine and Great Lakes waters from Washington state to the Florida Keys, and from Lake Huron to American Samoa. The network includes a system of 13 national marine sanctuaries and Papahānaumokuākea and Rose Atoll marine national monuments. 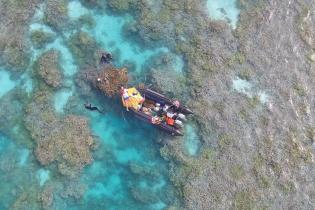