April 2, 2012 — Coffee farmers in the high central mountains of Puerto Rico have begun to transform their industry by employing conservation practices to benefit another pillar of the region's unique image — coral reefs. By piloting new strategies to reduce nutrient and sediment erosion from agricultural practices, Guánica farmers are reducing threats to coral reefs many miles downstream. These activities, along with other projects aimed at building local capacity for coral reef conservation and reducing threats to coral reefs from near shore pollution, are the result of grant funding from the US Coral Reef Task Force's (USCRTF) Watershed Partnership Initiative.

"Collaborating with private landowners and nongovernmental organizations within the Rio Loco Watershed is vital to maintaining the ecological functions and values of the watershed system while creating new opportunities for economic development in the local community," said Edwin Almodovar, Director of USDA's Natural Resources Conservation Service's (NRCS) Caribbean Area.

Since 2009, USCRTF member agencies have invested in conservation and restoration projects in the Guánica-Rio Loco Watershed to address the loss of live coral on the reefs of Guánica Bay. The loss of coral reef in the bay is partially caused by land-based sources of pollution and sedimentation. The USCRTF enlists local partners in the protection and conservation of near-shore coral reef ecosystems and works in cooperation with state, and local government agencies, nongovernmental organizations, the scientific community, and commercial interests to further the understanding and conservation of coral reef ecosystems.

The USCRTF Watershed Partnership Initiative is a partnership of the National Oceanic and Atmospheric Administration, the Natural Resources Conservation Service, and the Fish and Wildlife Service, and is administered by the National Fish and Wildlife Foundation. Funding to date has advanced conservation throughout the Guánica Bay/Rio Loco watershed — with more than $1.1 million put on the ground since its initial efforts in 2009. In addition to these Partnership Initiative Community grant fund investments, Task Force Members have also invested other resources to support targeted, larger scale projects in the Guánica-Río Loco Watershed.

"Funding projects through a watershed-focused approach aims to address the wide-ranging source of threats to coral reefs and improve the likelihood of reversing current declines", said John Christensen, director of the NOAA Coral Reef Conservation Program.

"The efforts being made to improve water quality and land use in the Guánica Bay and Río Loco watershed illustrate the great value that the people of Puerto Rico place on protecting our rich natural environment," said U.S. Representative Pedro Pierluisi (PR). "This is a federal investment that is bringing lasting returns for our community in the form of improved water quality, reduced pollution run-off, sustainable land use practices, restoration of wildlife habitat, more green space, and healthy fish stocks and live corals in our waters. I continue my efforts in Congress to advocate for greater resources for these federal agencies and the National Fish and Wildlife Foundation, which enable them to maintain this partnership with our community."

Per unit area, coral reefs are one of the world's most valuable ecosystems in terms of ecological, economic and cultural capital, yet according to NOAA's 2008 State of the Coral Reef Ecosystems of the United States and Pacific Freely Associated States report, 58 -70% of coral reefs globally are directly threatened by human-associated activities. In the Caribbean, only 25% of reefs remain in "good" condition — with live coral cover is as low as 8% in some areas of Puerto Rico. In 2004, scientists documented that Guánica Bay had close to 25% coral cover; in less than a decade that level has dropped to less than 10%. Based on the current rate of decline, corals are currently at a higher risk of extinction than any terrestrial group of species except amphibians. Of particular concern are the reef-building coral species, which are susceptible to human impacts like terrestrial run-off and fishing impacts that decreases their resiliency to rising temperatures and increased frequency of weather events from global climate change. Some of these species are already listed as threatened under the Endangered Species Act.

In 2011, the US Coral Reef Task Force Partnership Initiative awarded $540,000 for coral reef conservation and capacity building projects within the Guánica-Rio Loco watershed. When leveraged by $220,000 in match from the award recipients, close to $760,000 will support on-the-ground conservation and capacity building in the Guánica/Rio Loco watershed in Puerto Rico, with the ultimate goal of improving coral reef health in Guánica Bay. "This year's group of projects provides funding in the high mountain areas to stabilize soils and reduce nutrients all the way down to the mouth of the bay," said Jeff Trandahl, CEO and executive director of the National Fish and Wildlife Foundation. "At the mouth, new wetlands will be created that will reduce sewage pollution entering the bay, provide additional habitat for wildlife and add green space for local communities."

A sampling of the 2011 recipients' activities includes:

The NOAA Coral Reef Conservation Program (CRCP) supports effective management and sound science to preserve, sustain and restore valuable coral reef ecosystems for future generations. CRCP also serves as the Secretariat for the USCRTF. NOAA's mission is to understand and predict changes in the Earth's environment, from the depths of the ocean to the surface of the sun, and to conserve and manage our coastal and marine resources. For more information, please visit www.coralreef.noaa.gov.

Established by Congress in 1984, the National Fish and Wildlife Foundation sustains, restores and enhances the nation's fish, wildlife, plants and habitats. Through leadership conservation investments with public and private partners, NFWF is dedicated to achieving maximum conservation impact. In 26 years, NFWF has funded 3,700 organizations and leveraged $490 million in federal funds into $1.6 billion for conservation. For more information, visit www.nfwf.org.

The National Fish and Wildlife Foundation and the other members of the USCRTFPI gratefully acknowledge that a portion of the funding for USCRTF coral projects awarded in 2011 arose from the successful prosecution by the U.S. Department of Justice of a case arising under the Act to Prevent Pollution from Ships. The case was brought by U.S. DOJ in the United States District Court for the District of Puerto Rico (United States v. Epps Shipping Company, Case No. 3:11-cr-00058-DRD). Certain funds paid as "community service" pursuant to the judgment in the case were specifically designated to fund projects aimed at rehabilitating and protecting coral reefs in and around Guánica Bay. 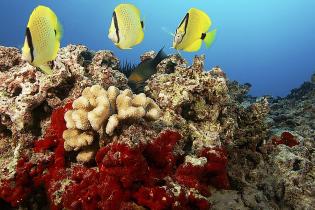 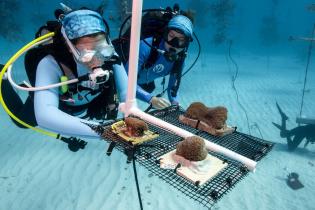 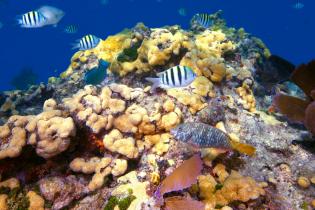