Clearing the way for the return of eels

Those who dismiss American eels as slimy muck-dwellers are missing out on one of North America’s most fascinating wildlife stories.

These incredible fish start their lives hundreds of miles off the coast of the Southeastern United States, hatched from eggs laid in the Sargasso Sea. Ocean currents carry the tiny, transparent babies northeast, toward the Mid-Atlantic region and New England.

Known as “glass eels” at this stage of their lives, these slender and transparent juveniles enter coastal estuaries and start working their way upstream. As they move inland, the eels turn brown and become known as “elvers.” When they reach adult size, another color change leads to yet another name: “yellow eels.” After 10 to 20 years living as freshwater fish, these yellow eels receive some kind of signal — unknown to science — that triggers an amazing transformation. Their eyes grow larger, they stop eating, and they become “silver eels.” They swim back downstream, out into the Atlantic Ocean and across thousands of miles to gather in the Sargasso Sea, where they spawn and die. 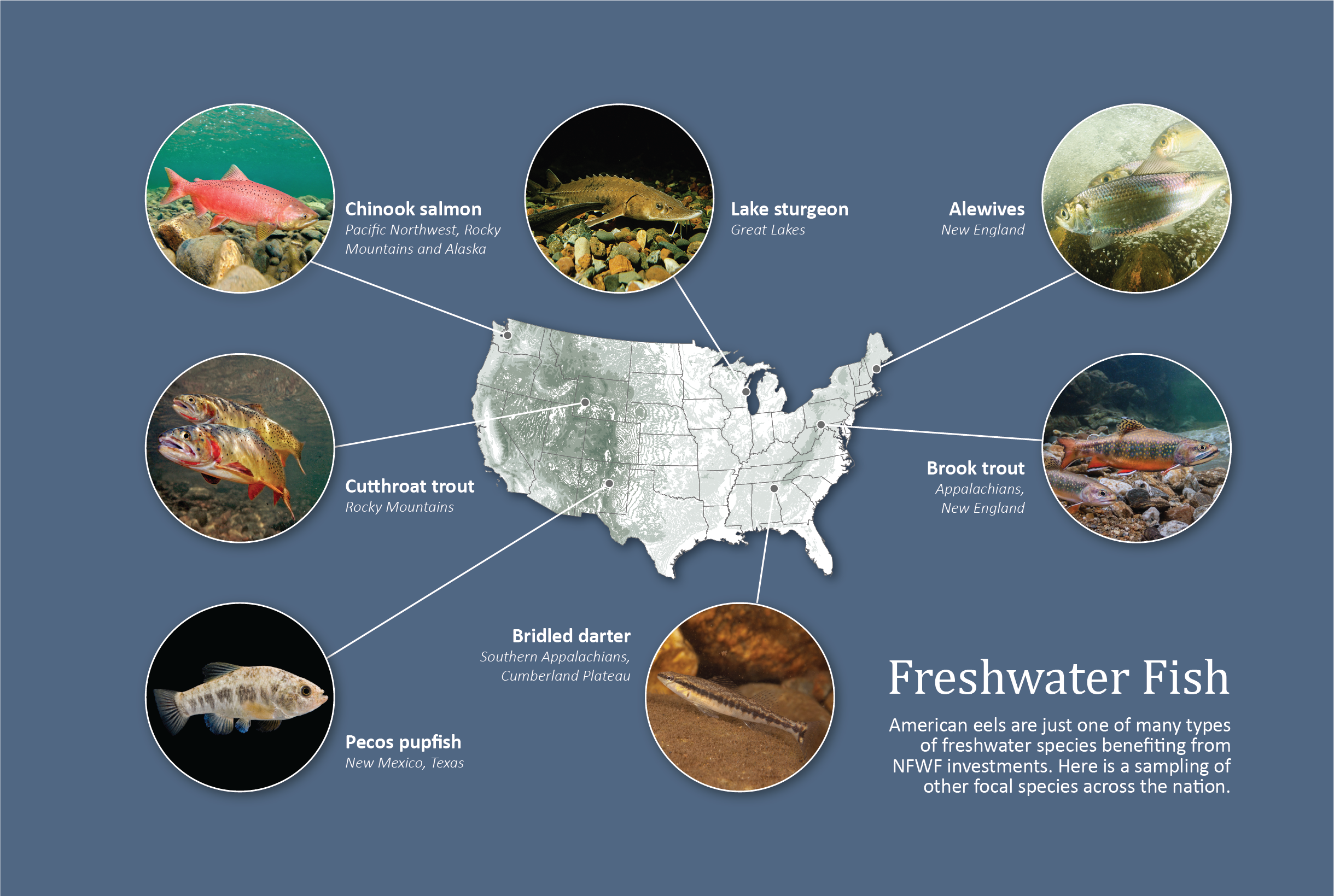 Eels serve critical ecological functions everywhere they go. They provide food for a range of fish, birds — and adventurous human eaters — and keep food webs healthy by eating a variety of smaller critters as they go. When eels disappear from a watershed, often because of manmade barriers to their migration, things can go wrong.

Such is the case in the Schuylkill Watershed of Pennsylvania, where emerging research from the Delaware Riverkeeper Network (DRN) and other partners suggests a strong and direct correlation between declining eel densities due to manmade barriers, the rapid spread of invasive crayfish and the resulting disappearance of native crayfish.

In 2021, the organization completed a three-year project, funded in part by an $88,500 grant from NFWF, during which about 500 moderate-sized eels were captured from Delaware River tributaries and released in the Pickering Creek watershed. The group also released approximately 3,600 young-of-year glass eels that had been reared in a federal biology lab. Scientists will continue to monitor the health of the watershed as these young eels mature into adults over the next 10-20 years.

“The long-term sustainable health of the Pickering Creek ecosystem depends on the restoration of native crayfish populations and reduction of invasive crayfish,” said Erik Silldorff, restoration director at DRN. “This, in turn, will depend on reestablishing natural migratory pathways for American eels to repopulate this and similar streams in the Schuylkill drainage.”

Next: Restoring habitat along a raptor flyway