Hawaiian petrels dart and soar above the Pacific Ocean, swooping down amid the waves to snatch squid and small fish. Sleek and fast, these black-and-white aerial acrobats have long ago mastered the ocean wind.

Their chicks, however, are another story.

These flightless balls of gray fuzz spend the first few months of their lives in burrows underground. Having evolved without the threat of significant ground predators, petrels never needed to stash their offspring in trees or along steep cliffs. This evolutionary Achilles heel has left the chicks defenseless against predatory rats and cats introduced by humans. To make matters worse, invasive plants have infiltrated nesting sites, altering the habitat in ways that make it difficult for petrels to nest there.

Hawaiian petrels, now an endangered species, are not alone in their desperate fight for survival. Pacific islands such as those found in Hawaii remain hotbeds of extinction, where unique birds, plants, corals, fish and other wildlife succumb to a host of man-made threats.

Now, a new partnership focused on one of Hawaii’s smallest islands offers one of the biggest opportunities to save imperiled island species.

“We have a unique set of conditions here on Lāna‘i; one that would be difficult to find anywhere else in the world,” said Kurt Matsumoto, chief operating officer for Pūlama Lāna‘i, a land and resource management company dedicated to creating sustainable practices, cultural connections and economic opportunities on the island. “We have partnered with NFWF to launch a long-term, comprehensive conservation effort that spans over 20,000 acres, from the very top of the mountains to the coral reefs off our beaches. We will be able to stitch together projects across this landscape and measure real-world results at a scale never before attempted on Lāna‘i, or on any Hawaiian island.”

First colonized in the 15th century by native Hawaiians, Lāna‘i has undergone radical changes over the past 200 years. Sugar farms, cattle ranches and pineapple plantations have taken heavy tolls on the island’s native plants and wildlife. Cattle, goats, sheep and axis deer introduced by people have overgrazed native vegetation. Eroded soils have washed down mountains and out to fragile coral reefs.

Luckily, the times are changing on Lāna‘i. Major landowners, residents, and a variety of agencies and nonprofits are banding together in what could become a leading example of island conservation, species recovery and sustainable commerce.

In 2019, NFWF announced a new conservation partnership with Pūlama Lāna‘i focused on integrating the island’s community and cultural heritage into conservation activities. In its first year, the partnership plans to award $400,000 in grants to projects that protect and enhance coral reefs, native plants and animals, and sensitive coastal cultural sites.

The partnership will leverage NFWF’s extensive experience leading conservation efforts in Hawaii, including a record of success in deploying predator-proof fencing to protect critical ground-nesting sites for rare and endangered species such as the Hawaiian petrel.

“The techniques we develop here on Lāna‘i could help guide ridge-to-reef conservation efforts on other islands,” Matsumoto said. “We will be able to measure and document how various actions to remove invasive species and controlling sedimentation far up slope can improve coral health. Native Hawaiians practiced this form of land management, and we intend to use their example to guide us in healing the land and protecting our precious resources.

“The people of Lāna‘i understand and appreciate this holistic approach to restoring the natural landscape. As islanders, we know how closely connected we are to the land and wildlife and the sea, and how improvements made in one area can quickly generate benefits throughout the whole system.” 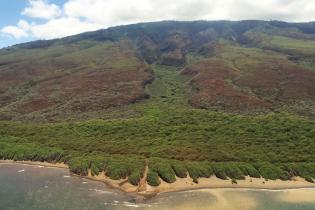