The grants were awarded to Trout Unlimited and the U.S. Geological Survey Forest and Rangeland Ecosystem Science Center through the Lahontan Cutthroat Trout (LCT) program, a partnership between NFWF and Bureau of Reclamation, the U.S. Forest Service, the U.S. Fish and Wildlife Service and the Bureau of Land Management.

"Over the past eight years the Lahontan Cutthroat Trout program has made major gains in enabling trout to survive and thrive in critical streams in California, Nevada and Oregon," said Jeff Trandahl, executive director and CEO of NFWF. "The grants announced today will help cement NFWF's impact in the region by establishing networked stream systems to sustain Lahontan cutthroat trout strongholds and support research to inform ongoing management of protected streams long into the future."

A complete list of the 2018 grants made through the LCT program is available here.

About the National Fish and Wildlife Foundation
Chartered by Congress in 1984, the National Fish and Wildlife Foundation (NFWF) protects and restores the nation's fish, wildlife, plants and habitats. Working with federal, corporate and individual partners, NFWF has funded more than 4,500 organizations and generated a conservation impact of more than $4.8 billion. Learn more at www.nfwf.org. 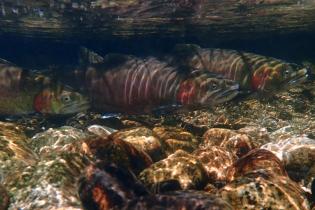