The National Fish and Wildlife Foundation (NFWF) recognizes that in some instances award subrecipients might have costs that are not directly attributable to projects or activities being funded by the Foundation, but that the recovery of those indirect costs is necessary in order to effectively implement the respective projects or activities. In those situations, the following indirect cost policy applies.  Please review the Definitions (D) Frequently Asked Questions (E), and Appendix sections of this document for more information.

The following table illustrates the appropriate rate to use when applying indirect costs to projects:

View a PDF version of this chart here.

Indirect costs must be calculated using the cost base defined in the organization's NICRA. Entities without a valid and approved NICRA must use the appropriate base defined in section B.2, B.3, or B.4 of this policy. The cost base formula will result in the calculation of the modified total direct cost which will then be multiplied by the negotiated indirect cost rate. The resulting calculation represents the indirect cost allowable for the project. Learn more and download NFWF's Indirect Cost Calculator. 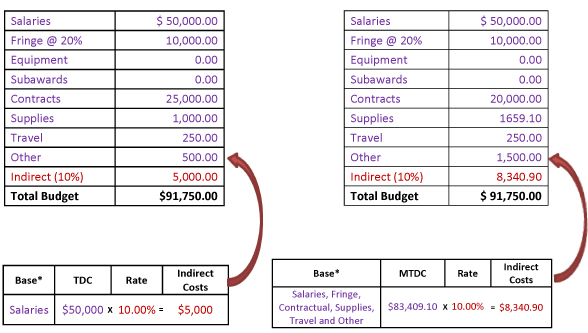 View a PDF version of this chart here.

Base – formula specified in an entity's NICRA that defines the appropriate MTDC for use when calculating indirect costs applicable to a project, program or outcome

Contract – a legal instrument by which an entity purchases property or services needed to carry out the project or program under an award.

Cost Allocation Plan (CAP) - generally used in lieu of an indirect cost rate proposal. A CAP may be necessary when substantial direct costs of programs consist of joint or common cost distributions and/or when the nature of the subrecipient's activities is such that direct costs cannot be adequately determined with reasonable precision. In such situations, use of a CAP may be more suitable than an indirect cost rate. A CAP (if required) should be submitted to the cognizant federal agency

Direct Costs – costs that can be attributed specifically to a particular project, program, activity or final cost objective

Documented Evidence – a copy of the complete indirect cost rate proposal application submitted in order to recover indirect costs. Must include complete signed proposal with the date submitted

Indirect Cost Rate Proposal – the documentation prepared by an organization to substantiate its claim for the reimbursement of indirect costs. The proposal provides the basis for the review and negotiation leading to the establishment of an organizations indirect cost rate by their cognizant agency

Modified Total Direct Costs (MTDC) Uniform Guidance Definition – calculation of project direct costs excluding cost items as identified in the entity's NICRA (base definition), or as defined in Â§200.68 of the Uniform Guidance if a valid and approved NICRA does not exist. The MTDC base can vary by organization.

Negotiated Indirect Cost Rate (or Recovery) Agreement/ NICRA – agreement negotiated between an entity and their cognizant federal agency regarding the "fair share" of indirect costs that can be charged to federally funded projects. Federal, state, local governments and Indian tribes may submit an authorized Cost Allocation Plan (CAP) in lieu of a NICRA

Unallowable Costs – costs that are expressly prohibited from being charged to a project (i.e. alcoholic beverages)

Q1. How do I determine my cognizant agency?

Generally, the cognizant agency is the federal agency from which you receive the most federal financial assistance.  NFWF does not serve as a cognizant agency or process negotiated indirect costs rate applications.

Q2. How do I apply for an indirect cost rate?

Work with your cognizant federal agency for procedures on applying for an indirect cost rate.

Q3. What if our entity does not have a NICRA?

If your entity does not have a valid NICRA, see Section A in the above Policy.

Q4. What documentation is required to verify that my entity has a valid NICRA?

When applying for a NFWF award, applicants must attach a copy of their current/valid NICRA. If the NICRA is expired, also provide the expired NICRA and the most recently submitted Indirect Cost Rate Proposal or Cost Allocation Plan for the appropriate period to be covered or application for extension.  ALL proposals with indirect rates above 10% for cost-effectiveness. See Section A above.

Q5. When can administrative, overhead, or operational costs be directly charged to a project?

If a cost can be shown to be directly attributable to a specific project or program it may be considered a direct cost.

Q6. Can unrecovered indirect costs be treated as match/cost share?

Q7. Can existing equipment, insurance or maintenance costs be charged directly to a project?

Generally no, these costs are considered indirect costs and would be recovered via an indirect cost rate if applicable.

Q8. Can government agencies charge indirect costs to a project?

Yes, if the agency has an approved Cost Allocation Plan (CAP) or NICRA. Additionally, agencies required to fully recover direct and indirect costs can do so with documentation of authorization from their agency's Director. Section A of the policy above applies to both NICRAs and CAPs. Note, however, NFWF reserves the right to scrutinize ALL proposals with indirect rates above 10% for cost-effectiveness.

Q9. What does a Negotiated Indirect Cost Rate Agreement look like?

This may differ by cognizant agency, however an example is provided in Appendix 1 of this document.

Q10. What MTDC base should be used to calculate my entity's indirect cost?

Q11. Who at NFWF do I contact if I have questions about allowable or allocable indirect costs?

Please contact the Program Manager or Grant Administrator assigned to your project for specific questions. For federally funded projects, costs must be in compliance with the applicable OMB guidelines.

Q12. Can NFWF subrecipients allow indirect costs to be charged to projects that they award to their subrecipients under the same program/project? 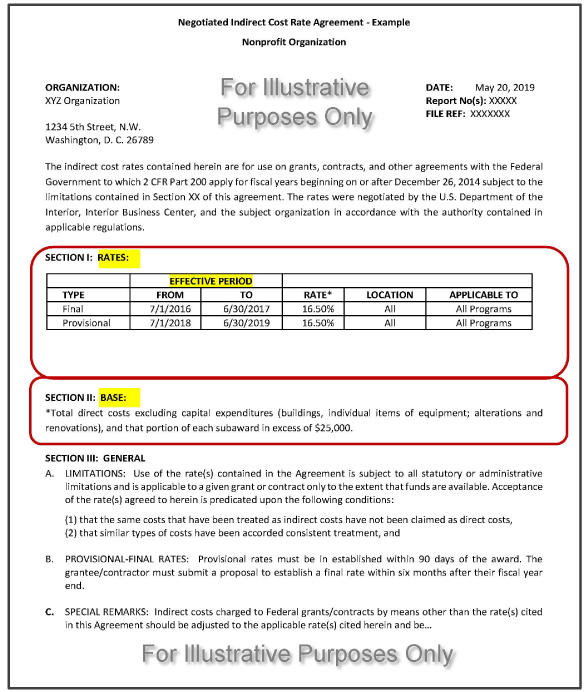 If you have questions concerning your application, please contact the staff member listed in your RFP. You can also email info@nfwf.org.