Each year, shorebirds undertake some of the longest migrations of any species on earth. Within the Atlantic Flyway, many shorebird species breed on the Canadian Arctic tundra and winter along the eastern shores of South America, stopping over at several critical migratory sites, particularly along the east coast of the United States. As they travel, Atlantic Flyway shorebirds are exposed to a diverse set of human-induced threats across this network of stopover locations.

While the nature and severity of threats vary, each stopover site plays a critical role in shorebird survival and effective conservation requires a holistic approach to identify and mitigate these threats. This approach includes coordinated research, conservation and management efforts of stakeholders across geographic boundaries and consolidated resources to undertake efficient conservation activities.

The American horseshoe crab plays an integral ecological role, particularly in the Delaware Bay where hundreds of thousands of shorebirds rely on horseshoe crab eggs to build energy reserves for their northward migration. Contrary to their name, horseshoe crabs are in fact not crabs at all. They are arthropods, making them more closely related to spiders and scorpions.

Least terns are a small migratory North American tern with three distinct populations - Atlantic coastal, interior and southern California. They are a vocal, colonial seabird vulnerable to development, human disturbance and predation on coastal nesting beaches. In some locations, least terns have begun successfully nesting on flat gravel roofs and are in general responsive to management actions.

Black skimmers are a beach-nesting, tern-like member of the gull family found across the Americas. The North American population migrates to the warmer waters of the Gulf of Mexico and Caribbean during the non-breeding season. Skimmers are aptly named for their unique foraging strategy of skimming the water’s surface with their lower beak, or mandible, and snapping shut when it contacts a fish.

The whimbrel is a large shorebird that uses its long, curved bills to feed on crabs and other invertebrates in the sand or mud. The most widespread of the curlew species, these birds winter throughout the Caribbean and northern South America and nest in the low-Arctic. Restoring and protecting critical foraging sites is an important strategy for maintaining a healthy population.

The red knot is a shorebird known for long-distance migrations, with some populations traveling from Argentina to the Arctic every year. Stopover areas providing high-quality foraging habitat are critically important for the red knot. For example, large numbers of red knots arrive in Delaware Bay during their spring migration to feed upon horseshoe crab eggs, which provide an excellent source of energy that fuels completion of the northward migration and contributes to successful reproduction.

The American oystercatcher is a stocky shorebird who is characterized as a short-distance migrant whose movements are confined to the United States and adjacent Caribbean islands. The oystercatcher wades in shallow water and uses its powerful bill to pry open and feed on mollusks, so protecting and restoring near-shore feeding grounds are critical for this species. 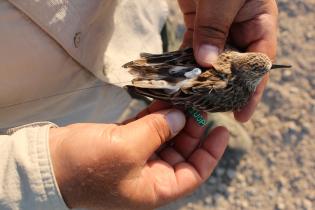 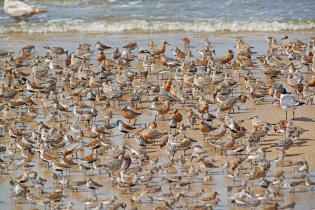 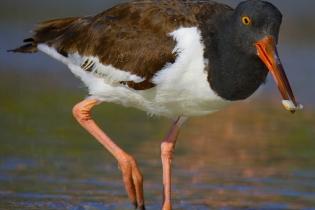