The Central Appalachia Habitat Stewardship Program restores and sustains healthy forests, rivers and streams that provide habitat for diverse native bird and aquatic species populations. Priority is given to projects within 10 focal geographies. The program supports projects in portions of the Appalachian region of Maryland, New York, Ohio, Pennsylvania, Virginia and West Virginia.

The program aims to:

From 2017 through 2022, the Central Appalachia Habitat Stewardship Program has awarded more than $13.6 million in funding to 71 projects to restore and manage dynamic forest blocks to enhance forest age and structural diversity, target outreach and assistance to key forest landowners and practitioners, sustain and improve habitat quality and connectivity within and between eastern brook trout population patches and restore eastern hellbender and freshwater mussel habitat. Grantees are providing more than $17 million in match for a total conservation impact of more than $30.6 million.

The American woodcock is a well-camouflaged migratory woodland shorebird. The bird feeds on earthworms, is a popular game species, and requires early successional forest habitat for feeding and nesting. Woodcocks are harbingers of spring, with returning males conducting elaborate aerial courtship displays along old field edges as the last winter snows recede.

Black-throated blue warblers are neotropical migrant that nests in the rich deciduous and mixed coniferous forests of eastern North America. Breeding male and females are sexually dimorphic, meaning they have vastly different appearances—so much so that they were originally described as two separate species. While males have a black face and throat with a blue head and back, females are a plain grayish olive color.

Although mostly out of sight, the rivers of the United States are home to more than 300 freshwater mussel species – one of the highest counts in the world. They are beautiful and varied in terms of form, and important as indicators of stream health. Freshwater mussels not only depend on healthy waters, they contribute to that end by filtering vast amounts of water. Unfortunately, these species are at greater risk of extinction than any other group of its size in the nation.

A well-known inhabitant of eastern deciduous forests, the wood thrush is known for it's flute-like song during the mating season. Wood thrush are excellent indicators of moist mature forests with structurally complex mid and understories. Habitat loss and degraded habitat quality on both breeding and wintering grounds have resulted in population declines since at least 1970.

The eastern brook trout is the only trout native to the eastern United States and inhabits coldwater rivers and lakes. Sensitive to even small declines in water quality and increases in sedimentation, brook trout can serve as excellent indicators of the health of a stream or river ecosystem. 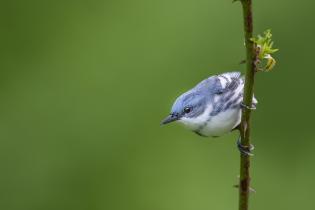