The New England Forests and Rivers Fund is dedicated to restoring and sustaining healthy forests and rivers that provide habitat for diverse native bird and freshwater fish populations in New England. The program annually awards competitive grants ranging from $50,000 to $200,000 each.

Since its creation in 2015, the New England Forests and Rivers Fund has awarded 93 grants that will restore early successional and mature forest habitat, modify and replace barriers to fish movement, restore riparian and instream habitat, and engage thousands of volunteers in forest habitat restoration and stream connectivity projects in Connecticut, Maine, Massachusetts, New Hampshire, Rhode Island and Vermont, plus the Lake Champlain, Saint Lawrence and Upper Hudson watersheds in New York. These projects are expected to:

The program has awarded more than $12.3 million in grant funding to date. Grantees, in turn, are leveraging an additional $22.2 million in matching contributions, for a total conservation impact of more than $34.5 million.

The American woodcock is a well-camouflaged migratory woodland shorebird. The bird feeds on earthworms, is a popular game species, and requires early successional forest habitat for feeding and nesting. Woodcocks are harbingers of spring, with returning males conducting elaborate aerial courtship displays along old field edges as the last winter snows recede.

Northern long-eared bats are native to the old growth forests of the eastern and north-central United States. Populations in the northeastern United States have been severely affected by white-nose syndrome, a fungal disease that affects their hibernation, which led to their listing as an endangered species in 2015.

Alewife and blueback herring—collectively known as river herring—are diadromous fishes that spend most of their lives at sea but return to river and streams to spawn. Once abundant throughout the Atlantic seaboard, river herring populations have declined due to overfishing and habitat loss associated with the construction of dams. Recent conservation efforts have seen millions of river herring return to streams throughout New England, a promising sign not just for river herring, but also myriad other species that rely on them as an important food source.

Cape May warblers are a spruce-fir boreal forest-nesting neotropical migrant that spends the breeding seasion in northern North America and non-breeding period in the Caribbean. They are often seen as a flash of brilliant yellow and rust as they forage actively in the tops of trees where they are dependent on spruce budworm caterpillars.

Black-throated blue warblers are neotropical migrant that nests in the rich deciduous and mixed coniferous forests of eastern North America. Breeding male and females are sexually dimorphic, meaning they have vastly different appearances—so much so that they were originally described as two separate species. While males have a black face and throat with a blue head and back, females are a plain grayish olive color.

Moose are the largest of the deer species and the tallest mammals in North America. Their populations are limited to the northern forests of the United States and Canada, and they have thick, insulating fur to thermoregulate during the winter months. Moose forage on a variety forest plants and trees, and will also incorporate aquatic vegetation in their diet at certain times of the year.

The American shad is an anadromous fish that can be found in rivers and coastal waters along the entire Atlantic coast. Once supporting a large commercial fishery, shad have declined in abundance following decades of overfishing and the construction of dams along migration routes, which reduces access to spawning habitat.

Karner blue butterflies measure only 1 inch wide, and are native to the Oakland Savannahs, stretching from New York to Minnesota. The species requires specialized habitats where wild blue lupine is abundant, the exclusive food plant for Karner caterpillars. Populations were in steep decline following habitat loss and modifications, which prompted their listing as an endangered species in 1992.

Pollinators are a group of insect, avian and mammalian species that fertilize many flowering plants and agricultural crops by transferring pollen from the male structures (anthers) to the female structures (stigma) during foraging. More than 80 percent of flowering plants on earth need pollinators to produce the next generation, and it is estimated that they add hundreds of billions of dollars to the global economy, highlighting their extreme importance to human food security.

A well-known inhabitant of eastern deciduous forests, the wood thrush is known for it's flute-like song during the mating season. Wood thrush are excellent indicators of moist mature forests with structurally complex mid and understories. Habitat loss and degraded habitat quality on both breeding and wintering grounds have resulted in population declines since at least 1970.

One of North America's most iconic species, the monarch butterfly is best known for it's spectacular 3,000-mile annual migration from their northern breeding grounds to wintering grounds in central Mexico. A distinct, western monarch population migrates between the western states and their winter range in coastal California; both the eastern and western populations have been negatively affected by habitat loss and reduction in milkweed plants that serve as the sole food source for monarch caterpillars.

The eastern brook trout is the only trout native to the eastern United States and inhabits coldwater rivers and lakes. Sensitive to even small declines in water quality and increases in sedimentation, brook trout can serve as excellent indicators of the health of a stream or river ecosystem.

The threatened Canada Lynx is a medium-sized carnivore that inhabits boreal forests where their massive paws make them adapted to traveling through deep snow. These solitary hunters rely on contiguous, structurally diverse forest habitat that support abundant populations of their favorite prey, the snowshoe hare. 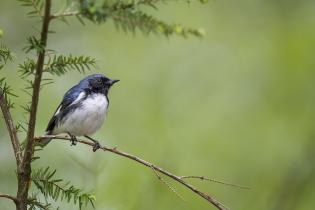 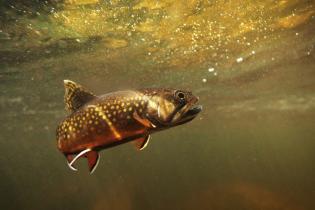